3D imaging and image processing is becoming more accessible and being applied to an increasing number of vision systems that can benefit from 3D automated inspection.

Multipix Imaging provide products for 3D image processing, we supply training on different hardware platforms and the use of HALCON imaging software which has a powerful suite of 3D tools.

A conventional structured light technique is derived from stereo vision. In the stereo vision (inspired by a nature of a human vision), one uses a pair of cameras to capture an object from two different perspectives.On the other hand, in the advanced structured light approach, one of the cameras is interchanged by a pattern projector, which emits a well-defined structured illumination. The camera and the pattern projector are a calibrated unit and are focused towards the scanning area (Object). 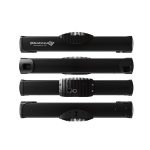 The pattern projector emits a set of coding patterns projected in a succession, one after another. These coding patterns encodes a spatial information. The camera captures the scanning area once per every projected pattern. The algorithm computes an exact 3D position of the object point.A big advantage of this technique is that it works independently of the object’s texture and results in high 3D reconstruction quality. It also offer a good speed of acquisition compared to say standard stereo-vision methods. Photoneo PhoXi Scan is an ideal example of a 3D camera system employing advanced structure lighting and uses a unique custom-designed projection unit. Learn more about Photoneo’s 3D Scanner… 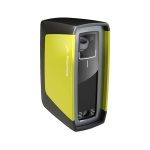 With this method of 3D imaging, there is one camera which has a known physical relationship with a laser line projector. The laser projects a line across the object being scanned and the deformation in the laser line, as being captured by the camera, determines the depth of an object at that point on the laser line. These can be purchased as pre-calibrated camera/laser units or you can purchase camera and laser as individual units and calibrate using software tools such as HALCON.SmartRay ECCO series of 3D laser triangulation cameras are available from Multipix Imaging, for applications that benefit from using pre-calibrated units which can provide high resolution results.If the application is using a separate camera and laser then we highly recommend the HALCON 3D machine vision library for calibration and also 3D image processing. Multipix can provide numerous camera options and lasers.VIEW ALL 3D CAMERA MODELS

HALCON is the comprehensive standard software for machine vision with an integrated development environment (IDE) that is used worldwide.

It serves all industries with a library of more than 1800 operators for blob analysis, morphology, matching, measuring, identification, and an extensive group on 3D vision tools, such as:

Similar to blob analysis in 2D, developers are able to measure and extract various features from 3D point clouds as well as segment point clouds based on those features. Background points can easily be removed via thresholding and point clouds can be intersected by a plane to create a 2D cross-section profile.

This tool searches for arbitrarily shaped 3D objects in a scene and determines their pose in 3D space. It locates multiple objects in a single scene even if objects are partially occluded or not entirely contained in the scene. This is a powerful tool for robotic bin picking and automated portioning systems as well as many more 3D machine vision applications.

Alignment of an acquired 3D point cloud object with a known object model or point cloud template enables users to check for and locate variations and deviations in the surfaces profile of manufactured parts.