The system inspects plastic moldings at this rate with the molds supplied either cold from storage at a minimum of 10°C or directly from a molding machine at a maximum of 40°C. The system detects and expels 100% of the parts that are outside the customer’s specified limits and reduces the minimum amount of waste due to damage caused to the moldings by the automated system to zero. 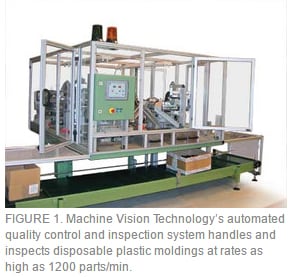 Parts are fed via a conveyor from either the molding machines or storage bins into two hoppers, one for each of the two rotating platens. They are then sent in a controlled manner into two centrifugal feeders that individually dispense them onto the conveyors in the correct orientation. These conveyors feed the parts in single file onto the rotating platens and any objects placed in the incorrect orientation are blown off using a pneumatic air jet. Rejects due to orientation are then recirculated into the system. The two conveyors feed two rotating platens, which by traveling at a speed faster than the conveyors allow a distance between the parts to be properly maintained.

To handle parts at rates as fast as 10 parts/s, each platen needed to be flat over its 650-mm diameter and capable of being spun at a rate fast enough to pass up to 600 moldings/min around the vision system. It was also necessary to inspect parts from multiple angles to ensure the bottom, top, and sides of each part were free from damage. MVT/RNA developed a glass disk platen to within micron accuracy over the disk’s 600-mm diameter to accomplish this. 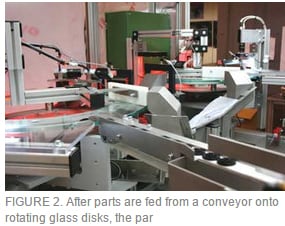 An encoder and trigger sensor were fitted on the rotating glass disk. Once a molding has passed through the trigger sensor, an encoder count is stored. A programmable logic controller (PLC) then tracks the plastic moldings around the disk, triggering the appropriate cameras and ejecting bad parts.

Each of the rotating disks passes the parts through three camera systems to inspect from below, above and horizontally. First, the system inspects the top of the moldings for damage and performs optical character recognition (OCR) of the cavity number at the bottom of the part. A second camera then inspects the bottom of the part, measuring its diameter and if any damage has occurred. A third, horizontally mounted camera measures the height and profile and any damage to the side of the part.

One of the challenges in measuring the cavity number from the top of the part was that the 3-mm-high alphanumeric cavity numbers are molded in the plastic at the bottom of a 6-mm-diameter hole, 5 mm deep. Passing the camera system at 600 parts/min, the position of these characters can be anywhere within 360°. Performing the required measurements and reading these characters at high data rates was accomplished using the HALCON OCR machine vision software.

Reject parts are blown off pneumatically with good parts falling into a collection box on a conveyor beneath the machine. In the MVT vision system, all three inspections were performed using high-resolution cameras with telecentric lenses and lighting to achieve repeatability of measured values with a 1-µm resolution, to 20-µm accuracy over 10,000 measured parts. 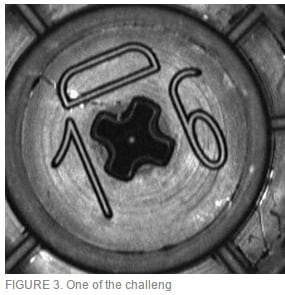 Good moldings continue around the disk and are swept down a chute into a collection box. A second PLC monitors a count of all good and reject parts from both heads, which maintain correlation over continuous 24/7 production.

In this way, the height of the 4.8-mm part can be measured to ±0.15-mm accuracy, its 26.35-mm diameter to ±0.2-mm accuracy, and the parts segregated when required by their cavity number. This proved to be of great value to the customer since it prevented the need for manual sorting of boxes of products containing thousands of mixed components, and the implementation of any statistical process control (SPC) systems.

As part of the tests performed on the system, rejected molds were segregated and passed through the system three times to measure the number of false rejects. This trial was conducted three times to obtain the required degree of confidence necessary for a 24/7 operation. To allow good parts to be automatically packed, an automatic indexing boxing system was also added that allows 3000 molds to be packed in each box. 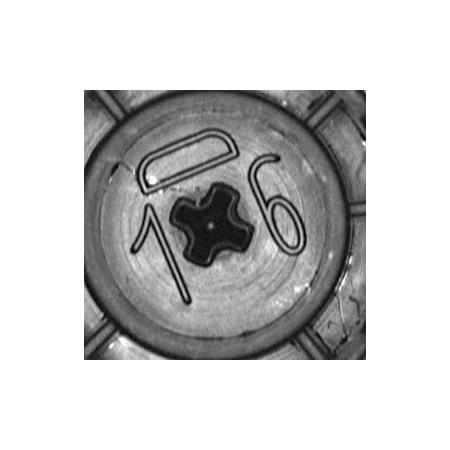