This is machine vision system is utilising a camera which is fitted with a motorised zoom lens capturing images of the resistors. HALCON, which is run on a PC, then determines any defects.

The co-ordinates of the edges of the defective parts are transferred to a Ulyxe laser Diode Pumped Solid State (DPSS) laser which ablates a linear path across the resistors, enabling them to be easily identified at a later stage during electrical testing.

The process of manufacturing Surface mounted resistors is done by depositing a metal oxide film onto a ceramic substrate. Resistive elements and terminations are then formed using a photo lithography process, when this is complete a laser trims each resistor to a specific size. The wafer-thin ceramic substrates themselves are relatively small, yet can contain several hundred resistors all of which must be inspected for any defects before the individual resistors on a wafer are diced into individual components.

There are issues with manually inspecting such small components for defects such as blemishes, cracks, and scratches, then marking those that are defective, the biggest one is time. To decrease the operator from such a burden, engineers at Envisage Systems have now developed a new fully automated system specifically for this purpose.

Not only does the system employ a machine vision system to check for the defective parts automatically, it also renders any faulty resistors unusable by scribing a laser across them. Once the resistors are then tested electrically later in the production process, the faulty resistors on the ceramic wafer can be immediately identified and rejected.

The inspection system itself is comprised of four stations, each of which work in concert under control of an embedded PC and an Omron PLC to load, inspect, ablate and finally unload wafers of resistors.

Before the inspection process can begin, 25 x 2″ square ceramic substrates – each containing hundreds of resistors – are manually loaded into an open-ended cartridge which is then inserted into the machine. Once the inspection procedure commences, the cartridge is lowed by an actuator until it reaches a point where the edge of the wafer in the top of the cartridge lies flush with a Festo pneumatic short stoke cylinder. The PLC then instructs the cylinder to move the first of the wafers into a loading station inside the machine.

The wafer must then be carried to an inspection station where the resistors can be checked for integrity by the vision system. To move the wafer, the system employs a linear rail mounted directly above the wafer fitted with a pair of vacuum grippers. Once a wafer enters the system, the rail moves the first of the vacuum grippers directly above the wafer and then lowers it until the gripper makes contact with the wafer. A vacuum is then applied to the gripper and the linear rail moves the gripper holding the wafer in a linear fashion up and over to an inspection station.

At the inspection station, an LED light source mounted below the wafer illuminates the entire wafer, highlighting the laser etching on the surface of the wafer and the body of the resisters themselves. The light source projects light through the wafer into a Camera fitted with a motorised zoom lens. During the inspection process, the wafer is moved incrementally by the inspection stage at the station along its x and y axes, a process that enables the system to capture images of as many, or as few, resistors as the operator wishes at a time.

As the images are captured, they are transferred to a PC over a GigE interface where they are processed on the fly by HALCON image processing software from MVTec. The image processing software performs several important functions. First, it enables the location of the resistors in the image to be determined. Having done so, the length and mid-position of each of the longest edges of the resistor can be calculated. Secondly, the pixels in the image of the body of the resistor are processed using a simple brightness threshold operator to determine their intensity. Through analysing the intensity of the pixels, the system can ascertain whether any blemishes, cracks and scratches that would affect the integrity of any of the resistors are present.

As the images are analysed, any parts deemed to be defective are flagged as rejects and the coordinates of the edge-points of the edges of those parts on the wafer are stored in a software map. Once the entire resistor array has been mapped, a motorised stage moves the wafer into an ablation station.

The PC then transfers the coordinates of the edges of the defective parts to a 6W Ulyxe laser Diode Pumped Solid State (DPSS) laser. Using the previously determined coordinates, the beam from the laser is moved across each defective part from one edge to another. The resulting heat energy created by the laser then vaporises the resistive material across its mid-section rendering it ineffective.

The unloading station operates in a similar manner to the loading station. Here, another Festo pneumatic short stroke cylinder that lies flush with edge of the wafer is actuated to move the edge of the wafer into an empty open-ended cartridge. Once a wafer has been loaded into the cartridge, the machine then raises the cartridge so that an empty slot then enables another wafer to be unloaded into it.

Because the resistors on the wafer can be manufactured in a number of different sizes, it was important to enable the machine to be able to accommodate any variants presented to it. To enable the system to do so, the system stores a recipe for each type of product to be inspected on the PC.

Each recipe contains details of the size of the resistors and associated machine inspection parameters that are automatically configured by the machine prior to inspection. These include the amount of zoom that must be applied by the lens to capture a specific number of images of the resistors at one time, and the number and size of the incremental steps that the wafer must be moved through at the inspection stage while under the field of view of the camera.

Due to the flexibility of the system, an operator can simply select a new variant of resistor to be inspected through a touch screen Human Machine Interface (HMI) software interface, and the system will automatically configure itself to accommodate the request prior to inspecting the wafers.

An earlier version of the machine has already proved effective at eliminating defective resistors from the resistor manufacturer’s production process. As useful as it was however, the new system looks set to enhance the production process even further, due to its enhanced ability to inspect batches — rather than single — wafers of resistors at a time. 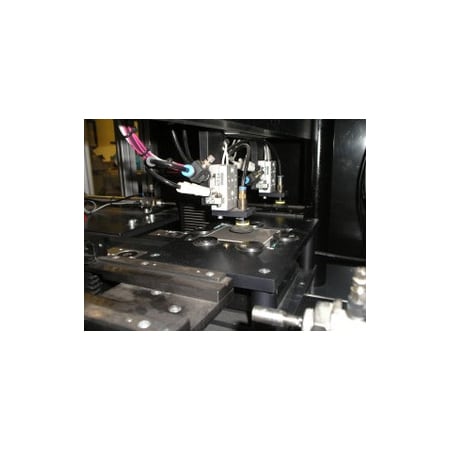