The introduction of the Coaxlink Quad 3D-LLE frame grabber from Euresys enables users to build higher-performance 3D vision measurement systems at a lower cost by selecting the camera, lighting, optics and image processing solution that is best suited for their application. The frame grabber generates topographical maps in the same manner as 3D integrated sensors, calculating the profile of the object under inspection by processing an image of a line projected onto the object. Coaxlink Quad 3D-LLE frame grabbers consist of a standard PCI Express card so they work with many industrial personal computers (PCs). 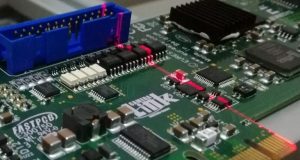 The Coaxlink Quad 3D-LLE frame grabber processes up to 2.5 Gigapixels per second so it is compatible with the fastest cameras on the market today, providing the opportunity to use higher resolution cameras at higher frame rates for optimal inspection performance. The position of the laser line is processed at the same speed that the camera acquires images. 3D laser line extraction is carried out in the field programmable gate array (FPGA) of the frame grabber, leaving the host PC central processor unit (CPU) free for 3D analysis. Unlike a 3D integrated sensor, the user can choose the optimal light source such as blue lasers for the high accuracy or white light for better speckle and higher safety.

Up to four triangulation units consisting of a camera and a light source can be connected to each Coaxlink Quad 3D-LLE so a single frame grabber can support multiple applications or multiple sides of an object or both. The frame grabber’s four CoaXPress connections each provide a peak transfer rate of 625 MB per second for a total of 2.5 GB per second. Running at three times the speed of Camera Link, CoaXPress is today’s fastest vision interface standard. The new frame grabber offers three different methods to compute the location of the line: peak, maximum and center of gravity, providing further opportunities for optimising vision system performance. The Coaxlink Quad 3D-LLE frame grabber provides height maps compatible (after conversion) with standard image processing libraries such as Point Cloud Library (PCL) and Euresys will be introducing its own 3D vision library later in 2017.

All in all, the Coaxlink Quad 3D-LLE frame grabber approach makes it possible to achieve 100% inspection in production applications at a substantially lower cost than an integrated 3D sensor while offering the potential for substantial performance improvements by more closely matching the inspection system to the requirements of the application. 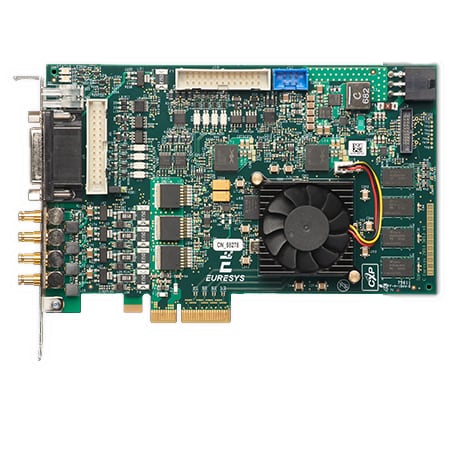 It would be great to see you at Euresys Framegrabbers Provide Fast Alternative to 3D Inspection, let us know your details so we know you'll be there.