Euresys is a pioneering force behind the CoaXPress standard and likes to keep up a fast pace when it comes to innovations. It’s now introduced an 8-connection CoaXPress frame grabber.

It was four years ago that the first cards of the Coaxlink series (Euresys CoaXPress frame grabbers) were announced in December 2013.

The main target for the new Octo is multi-camera applications, with support for up to eight cameras on a single frame grabber/single slot. Successful Coaxlink applications include 3D AOI, FPD inspection, printing inspection and in-vehicle video transfer.

Marc Damhaut, CEO of Euresys, said: “We’ll probably stop at eight, as there is no more space for connectors on the bracket, unless we included a second bracket. The next generation will be focused on increasing the connection speed to CXP-12 (12 Gbits/s). We have just met with our distributors and have listened to their feedback as to what the market wants over the coming months and years.

“The great thing about the Coaxlink Octo, is it now allows eight cameras to work together and customers can vary the configuration. The request for a frame grabber with eight connections came from our customers.”

Damhaut added: “We’re happy with how CoaXPress is evolving and the technical committee is now working on version 2.0. We originally launched our CoaXPress products three years ago and it was really at the right time. CoaXPress is really picking up and demand is good from customers.”

View the datasheet for this model and learn more… 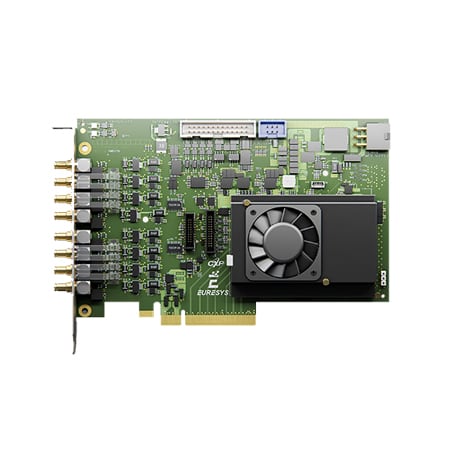 It would be great to see you at Introducing Euresys Octo – An 8 Connection CoaXPress Framegrabber, let us know your details so we know you'll be there.