CoaXPress (CXP) is a digital interface standard capable of sending video, control, communication, triggering and power at high speeds over a single standard coax cable. With CoaXPress, a camera can be connected to the host system using just one standard coax cable or multiples for greater bandwidth. Version 1.0 (2013) stated that the maximum high speed downlink was  6.25Gbps (CXP-6) per cable for video, images and data, plus a lower speed, 20Mbps uplink for communications and control. Power is also available over the cable (“Power-over-Coax”). CoaXPress enables lengths up to and over 100 meters with standard and high flex coax cable.

In June 2019 Version 2.0 of the standard was released which stated a key aim of CoaXPress is to support the fastest cameras on the market. CoaXPress v2.0 adds two additional speeds – 10 Gbps (CXP-10) and 12.5 Gbps (CXP-12). This doubles the cable bandwidth, so for example a 4-core cable can provide 4 GBytes/sec of data continuously and reliably from camera to frame grabber.

The current v2.0 version of the CoaXPress standard was released in June 2019, and includes the following key enhancements in relation to the previous version v1.1.1 (Dec 2015): 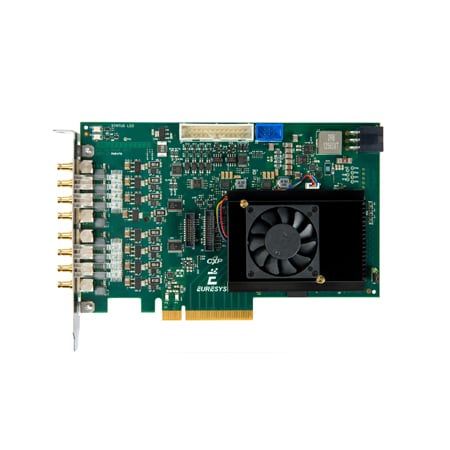 It would be great to see you at CoaXPress, let us know your details so we know you'll be there.