Robotic pick and place applications can be very daunting. They require an understanding of both robotics and vision at quite a deep level. Typically, most engineers that take on these projects are familiar with one or the other and this can lead to problems when things get complex.

In recent years so-called off the shelf’ bin picking systems have become very popular but most are very limited, typically using 2D or 2.5D techniques. These systems can certainly reduce the struggle with more traditional pick and place applications but stop short of addressing anything that requires true 3D and thus is often not deployable for many applications.

Multipix has been close working partners with Photoneo for the past 5 years and we are very pleased to showcase Photoneo’s latest edition of their cutting-edge technology. The BPS (Bin Picking Studio) system Version 1.6.

Photoneo has worked tirelessly to bring their exceptional and unique products to market, offering the best-in-class 3D vision components such as the ‘PhoXi’ 3D Scanner and ‘MotionCam-3D’ that can provide dense point cloud images of moving objects. With their vast knowledge of sensors, 3D, and robotics, Photoneo developed BPS in its first edition more than 3 years ago.

At the heart of BPS is a ‘Phoxi’ 3D camera (various sizes supported), which provides an incredibly clean, 3.2 million point, true 3D point-cloud of the surface of the items in the ‘bin’.  The camera is connected via ethernet to the BPS ‘vision controller’ which is a compact computer running the BPS software and supporting the I/O to the robot. The BPS software uses a very intuitive ‘point and click’ UI (User Interface) for system set up with no user code required.

The first steps to using the BPS system include uploading CAD models of the environment to the vision controller; this includes the ‘bins’, the robotic cell, the robot arm, the gripper, and the part to pick. This information is used by the system not only to calculate the picking parameters, but also to automatically calculate collision avoidance and path planning.

As you can see from the video, the BPS UI is real-time, displaying the robot’s position whilst the system is running.  For our demo application, the YASKAWA Motoman GP4 robot arm is only running at 10% of max speed to ensure the relatively flimsy cell remains stable and so that the vacuum gripper remains in touch with the parts being picked.  In practice, the robot could be made to run considerably faster. It is also worth mentioning that the BPS live display helps for debugging the setup. BPS is deployable on a large scale and is compatible with a wide range of robots. It is the best true 3D vision-based pick and place system available.

Get in touch with our experts

Contact us and our team of experts will be in touch within 24 hours. 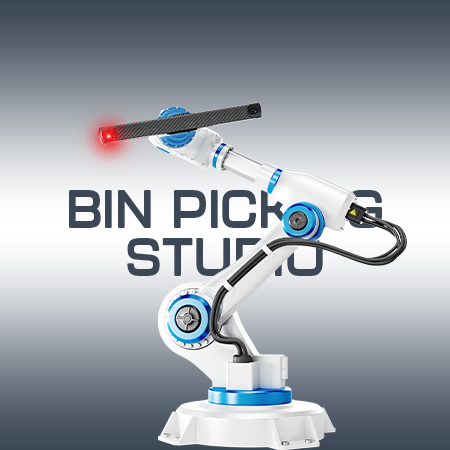 It would be great to see you at Photoneo Bin Picking Studio, let us know your details so we know you'll be there.