The award for the most innovative development in the machine vision sector goes to Slovakian company, Photoneo for its MotionCam-3D.

The team at Photoneo burst with joy after being announced the winner of the Vision Award 2018 at the Exhibitors’ Night in Stuttgart. Photoneo won the Award with its MotionCam-3D camera.  Based on Photoneo’s own patented technology called Parallel Structured Lighting, implemented by a custom CMOS image sensor. MotionCam-3D is the best close and mid-range 3D camera for sensing in rapid motion, due to the highest resolution and highest accuracy in its category. The groundbreaking technology had been the very reason why Photoneo was established in 2013.

The prize for extraordinary innovations in machine vision has been presented for the 23rd time. The Vision Award is a significant biennial international recognition of a sole innovation chosen by an independent jury. The win does not only represent the highest honor and commitment for Photoneo. It’s an acknowledgement to the company’s investors and customers for partnering with the incredibly talented and devoted team of visionaries who are able to turn their ideas into success.

Due to launch in the new year, this is definitely one to look out for… 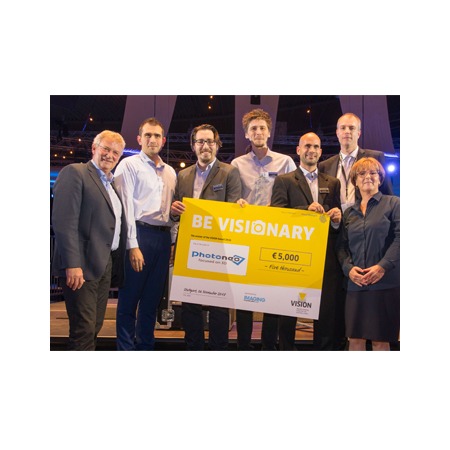 It would be great to see you at Photoneo wins VISION Award 2018, let us know your details so we know you'll be there.